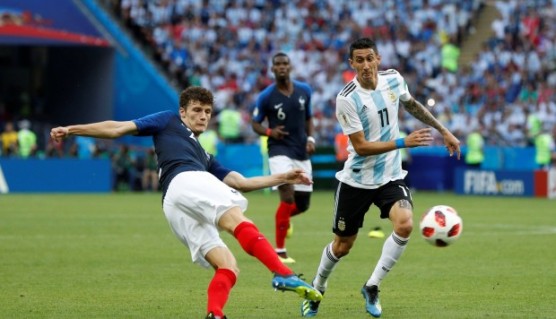 On the way of France team to their final Victory in the soccer World Cup, the game against Argentina (France 4 – Argentina 3) was the shifting moment of their competition, the match during which they built (or confirmed) the confidence that nothing could stop them, even a tight game against Belgium (France win 1-0) and a suffering against a brilliant Croatia in finale (France win 4-2).

During this game against Argentina, France was led 2-1 at the beginning of the 2nd half time and that’s when right back defender Benjamin Pavard chose his time to make an “out of the blue” goal that put the team back on track at a crucial moment. This goal was a little bit irrational to some people (see video HERE). However here is where it came from according to Pavard:

“It is rare that I attempt such a shot, even in practice. I like the move but I never do it. I felt a little guilty on the 2nd goal from Argentina (he led to the free kick and also made a small mistake on the goal itself). I had to react, to not give up, show that I was mentally tough. My objective was to make an assist pass or score a goal. When I hit the ball, I told myself to hit it not too strong and aim at the goal. If I hadn’t been at fault on the 2nd goal of Argentina, I might have not gone that up the field” (and been in the position to score).

This is a great example of resilience. Instead of ruminating his mistake and getting distracted by these negative thoughts, he used this mistake to motivate himself (intention to make an assist or a goal) and to be even more focused on the task hand (where to go on the field, focusing on his gesture while hitting the ball etc…)

Next time you make a mistake or have a bad time during the game, here is what you can do:

One thought on “Learning from the World Soccer Cup: the importance of Resilience during a game”